GiveBack360 gives back the largest percentage of sales compared to any other online fundraising program!

How are Funds Distributed?

Each purchased offer donates 15% of the purchase price. This is known as the "Donation Amount". Since members and merchants each support their own school or nonprofit, each fundraiser receives 50% of the Donation Amount. If the merchant happens to also support the member's fundraiser, then 100% of the Donation Amount goes to the one fundraiser. Members and fundraisers can also team up to create campaigns that are only accessible by that fundraiser's members. This is called an "Exclusive Offer" which gives even more to the fundraiser! - 150% of typical donation amount or 22.5% of the purchase price. Partnering with your favorite merchants and creating Exclusive offers is a powerful fundraising tool!

Example:  A merchant posts an offer valued at $50 Value for a price of $40. $6 goes to charity.  If the merchant posts 100 of these offers, then the campaign will raise a total of $600 for charity.

When one of your GiveBack360 members buys a merchant offer you get $3 credited to your school.

GiveBack360 allows schools to generate fundraising from adding members, signing up merchant campaigns, or both.  You maximize your fundraising when you do both.

Think of the online GiveBack360 network as a co-op of offers.  More offers benefit everyone with more choices to Save and Give.  Those that post the offers get to direct ½ the funds to school of their choice.  Those members that purchase the offers automatically direct ½ the charitable funds to their member school.  It is very democratic and the opportunity to add campaigns, promote offers and raise significant funds for schools is unlimited!

Merchants post fundraising offers.  They typically contain a discount to members.  Additionally, merchants post offers for a specific school or nonprofit for fundraising purposes.  Of the discounted price the merchant is credited 85% and directly earns 70% on each purchase.  15% is directed to fundraising and credited as a donation from the merchant.  The 15% is posted as ½ the charity dollars to the members school and ½ the charity dollars to the school that set up the merchant offer.  If a single school works with a merchant and all GiveBack360 members that buy the offers are also from that school, then all funds raised go to that school.

The total value of this campaign is as follows:
85% of 100 sales at $40 is credited to the merchant: Total merchant credit for campaign is $3400.

Merchant redeems each offer and 70% is posted directly into the merchant account: Total amount paid to merchant is $2800.
The merchant is credited with a $600 fundraising contribution.  Campaigns are tracked all year and statements showing detailed contribution transactions are sent to all merchants after the end of the calendar year. 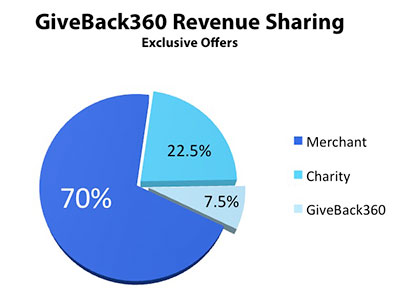